Result: Leicester City made to wait for historic title after being held at Old Trafford

A 1-1 draw against Manchester United this afternoon has denied Leicester City the chance of winning the Premier League title at Old Trafford for now.

The 10-man Foxes, aiming to become just the sixth side ever to lift the famous crown, levelled things up in the first half when Wes Morgan cancelled out Anthony Martial's opener.

What would arguably be the greatest achievement in sporting history will have to wait for at least another day, however, with Tottenham Hotspur now needing a win at Chelsea on Monday to keep the title race alive. 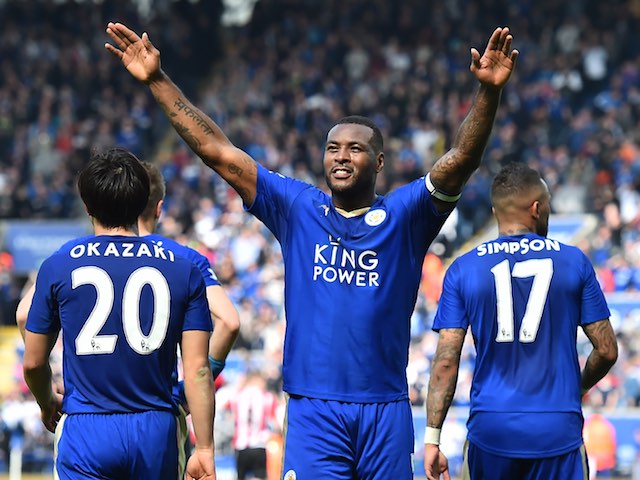 It was the hosts who started by far the brighter in a high-energy first half, and they found a way through early on with their first on-target attempt of the game.

Antonio Valencia was played in down the right on the overlap, before cutting inside and floating a ball towards the back post where Martial - matchwinner at Wembley last weekend - ghosted in to fire the ball home from close range.

The Frenchman - a protégé of Claudio Ranieri's at Monaco - left Kasper Schmeichel with little chance between the sticks, but the Danish stopper did superbly soon after to keep out Jesse Lingard's shot from the opposite side.

Some nice play from Marouane Fellaini to firstly control a cross and then lay the ball off for Lingard ended with the youngster doing everything right when looking for the bottom corner, only for Schmeichel to get across.

That would prove to be a crucial moment in an entertaining first half, as former United midfielder Danny Drinkwater's lofted free kick was powerfully headed home by skipper Morgan on 17 minutes from City's first real attack of the match.

Both teams looked impressive when getting forward, but the closest there was to a third goal before the break arrived 40 minutes in when Jeffrey Schlupp - preferred to Marc Albrighton out wide once more - sent in a dipping cross that had David de Gea backtracking. 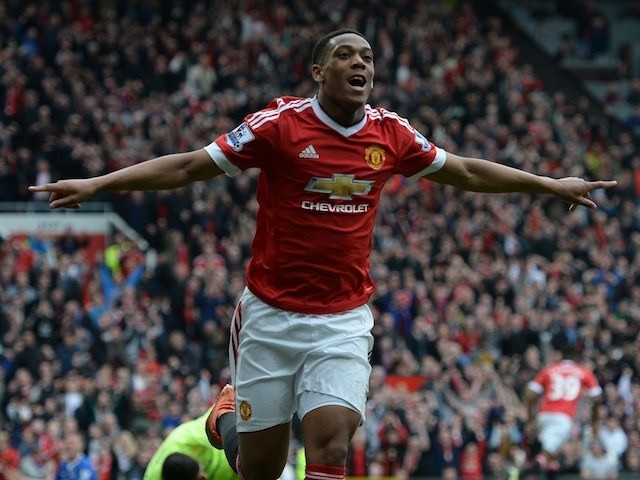 The Spaniard did well to simply claw the ball off his own goal-line, but Riyad Mahrez was waiting to pounce on the loose ball and was only halted by the legs of Marcos Rojo.

Referee Michael Oliver, who had earlier waved away home appeals for a Danny Simpson red card when bringing down Lingard as the last man, was quick to turn down the Foxes' protests to signal the end of the half.

The only other big talking point until then arrived midway through the half when Fellaini's elbow connected with Robert Huth's face, which could see the Belgian handed a potential three-game ban when reviewed.

In a complete reversal of the first half, Leicester came out of the blocks quicker than their opponents after the restart, forcing De Gea into a routine stop two minutes in from another Morgan header.

Simpson got in behind moments later but Shinji Okazaki was unable to tap the ball in from close range, with that proving to be a rare opening in a cagey 30-minute spell that followed.

The next save of the match did not arrive until 15 minutes from time, in fact, when Mahrez blasted a shot from the edge of the box at the end of a rare counter-attack that De Gea routinely punched away.

Chris Smalling came close to bagging a valuable goal for his side late on at the end of a Wayne Rooney cross, which he diverted inches wide of the target.

There was to be a twist with two minutes of normal time remaining when Drinkwater, already on a yellow, pulled back on substitute Memphis Depay on the edge of the box to be given his marching orders, although home supporters felt aggrieved not to be awarded a penalty.

A couple of Rooney attempts aside, there was to be no late drama at the Theatre of Dreams in the closing stages, meaning that a Leicester side assembled for less than £30m are now another step closer to getting their hands on a first ever top-flight title.

For the Red Devils, on the other hand, this is a costly draw that leaves them four points adrift of rivals Manchester City in the race for a Champions League spot next season.

Read Next:
Leicester, Spurs dominate PFA Team of the Year
>

Guardiola: 'Bayern mole not my problem'
6

Diego Simeone hits back at critics
1

Evans through to final of Busan Challenger
9