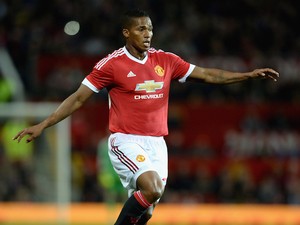 The Ecuador international's introduction is the only change to the team that started last week's FA Cup semi-final against Everton, with teenager Timothy Fosu-Mensah the player dropping to the bench.

Marouane Fellaini keeps his spot in the middle of the park alongside Michael Carrick, while Wayne Rooney will operate in the hole behind lone forward Marcus Rashford.

As for Leicester, head coach Claudio Ranieri has named the same XI that beat Swansea City 4-0 last time out.

Jamie Vardy's suspension allows Leonardo Ulloa to keep his spot in the final third alongside Shinji Okazaki, while Jeffrey Schlupp keeps out Marc Albrighton, who is on the bench.

Former Man United players Danny Drinkwater and Danny Simpson are both in the Leicester side once again. Victory for the Foxes this afternoon would see them lift the Premier League title with two games to spare.

Danny Simpson: 'It is a massive point'

Simpson: 'Leicester can cope without Vardy'

Ronaldinho: 'I will find new club'
6

Ekeng passes away after collapsing on pitch
8

Guardiola: 'Bayern mole not my problem'
7

Oxlade-Chamberlain ruled out of Euro 2016
10

Arda Turan: 'I will remain patient'
4

Ekeng passes away after collapsing on pitch
7