David de Gea: 'This has been my best season at Manchester United' 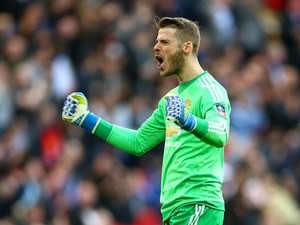 © Getty Images
Manchester United goalkeeper David de Gea says that this has been his best season at the club.
By Danielle Joynson, Staff Reporter
Filed: Wednesday, May 4, 2016 at 13:33 UK

David de Gea has claimed that this season has been his best in a Manchester United shirt.

The Spain international has helped the Red Devils keep 17 clean sheets, and has produced crucial saves on numerous occasions.

The 25-year-old's form won him the Player of the Year prize voted for by United fans for the third year running.

United are still in the race for a top-four finish as they are four points behind Manchester City with three games left to play, and they could end the season with the FA Cup if they beat Crystal Palace in the final later this month.

"This is probably my best season in Manchester but now we have some important games," De Gea told MUTV. "We have something to win at Wembley.

"It's a big honour to receive the trophy three times in a row. I want to say a massive 'thank you' to everyone. We know they are one of the best [sets of] fans in the world."

De Gea was on the verge of joining Real Madrid last summer, but the transfer fell through when paperwork was not filed by the deadline in Spain.

Enter your email address to subscribe to Sports Mole's free daily transfer newsletter! Sent twice a day during the transfer window.
View our homepages for David de Gea, Football
Follow @SMManUtd to get every Man Utd headline from Sports Mole, and follow @SportsMole for the latest breaking news stories
Recommended Next on SM

Blind gets Rooney's Player of the Year vote

Carragher: 'Mourinho to United not happening'
5

Carragher: 'Mourinho to United not happening'
2