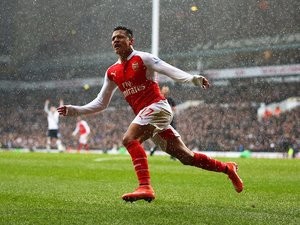 © Getty Images
A report claims that Arsenal attacker Alexis Sanchez is considering his future as he prepares to enter the final two years of his existing contract at the Emirates.
By Matt Law, European Football Editor
Filed: Saturday, May 7, 2016 at 09:26 UK

Arsenal boss Arsene Wenger is reportedly facing a battle to convince Alexis Sanchez to sign a new contract at the Emirates.

The Chilean international, who has two years to run on his existing deal, joined Arsenal from Barcelona in the summer of 2014 and struck 25 goals in 52 appearances during his first season in England.

The former Udinese forward has 16 goals this season, but his form in the second half of the campaign has been questioned.

According to The Telegraph, after being substituted against Norwich City last weekend, the 27-year-old headed straight down the tunnel and left the stadium, leaving Wenger unimpressed.

The same report claims that Sanchez is now seriously considering the possibility of leaving Arsenal at the end of the season as the attacker targets silverware.

Read Next:
Arsenal to move for Vincent Janssen?
>

Enter your email address to subscribe to Sports Mole's free match previews newsletter! Updates are sent twice a week.
View our homepages for Arsene Wenger, Alexis Sanchez, Football
Follow @SMArsenal to get every Arsenal headline from Sports Mole, and follow @SportsMole for the latest breaking news stories
Recommended Next on SM

Arsenal to move for Vincent Janssen?

Liverpool 'close in on Ousmane Dembele'
9

Serena Williams through to last eight
1

Liverpool 'close in on Ousmane Dembele'
8

Serena Williams through to last eight
3

Sainz not downbeat over Verstappen promotion