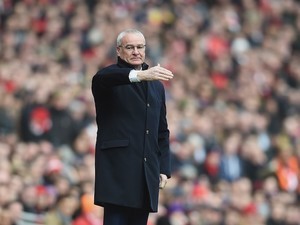 © Getty Images
Leicester City boss Claudio Ranieri pays tribute to the club's fans for their support throughout the 2015-16 season, which brought a Premier League title.
By Matt Law, European Football Editor
Filed: Thursday, May 5, 2016 at 14:33 UK

Leicester City boss Claudio Ranieri has paid tribute to the club's fans for their 'fantastic' support throughout the season.

At a press conference on Thursday afternoon, Ranieri spoke to the media for the first time since his team were confirmed as the Premier League champions for the 2015-16 campaign.

The Italian hailed his players, staff and chairman, but reserved special tribute to the club's fans, who "were amazing".

"I am very happy and I want to say thank you to all my players, the chairman, staff and the fans - they were amazing," Ranieri told reporters.

"It is difficult to give a message to these fantastic people. They dream, I say dilly-ding, dilly-dong, and they wake up and it is a reality. I say thank you because everywhere I hear them."

Leicester were famously available at 5,000/1 to win the Premier League title at the start of the season.

Enter your email address to subscribe to Sports Mole's free daily transfer newsletter! Sent twice a day during the transfer window.
View our homepages for Claudio Ranieri, Football
Follow @SMLeicester to get every Leicester headline from Sports Mole, and follow @SportsMole for the latest breaking news stories
Recommended Next on SM

Wayne Rooney: 'Our coach was smashed up'
3

Sullivan hits out at decision to delay kickoff
8

Sullivan hits out at decision to delay kickoff
5

Wayne Rooney: 'Our coach was smashed up'
6

Sullivan hits out at decision to delay kickoff

Wayne Rooney: 'Our coach was smashed up'

Wayne Rooney: 'Our coach was smashed up'