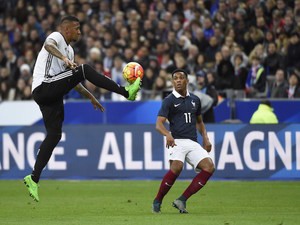 Manchester United's Anthony Martial has not been included in France's starting XI for Friday's Euro 2016 Group A opener against Romania at the Stade de France.

In addition, ex-Man Utd stars Patrice Evra and Paul Pogba also start for the hosts in the tournament's first game.

Visitors Romania, meanwhile, begin the match with Fiorentina goalkeeper Ciprian Tatarusanu in between the sticks, keeping Watford's Costel Pantilimon out of the side.

Razvan Rat and Vlad Chiriches, formerly of West Ham and Spurs respectively, are also in Anghel Iordanescu's starting XI as the Tricolorii bid to gatecrash the hosts' party.

Giroud: 'I want to leave mark in history'

Sturridge wins it for England in Lens
5

Wales captain Williams: 'We will regroup'
6

Coleman: 'Gutted for Wales but we must move on'
1

Skrtel 'on verge of joining Fenerbahce'
10

Wales captain Williams: 'We will regroup'
2

Coleman: 'Gutted for Wales but we must move on'
4

Lafferty out of NI starting XI against Ukraine
9

Wales captain Williams: 'We will regroup'

Coleman: 'Gutted for Wales but we must move on'