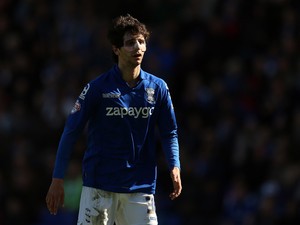 © Getty Images
Diego Fabbrini joins Serie B side Spezia Calcio on loan for the remainder of the season, with Birmingham City reportedly happy to offload him permanently in the summer.
By Daniel Lewis, Football League Correspondent
Filed: Tuesday, January 24, 2017 at 12:32 UK

Birmingham City midfielder Diego Fabbrini has joined Italian second-division club Spezia Calcio on loan for the remainder of the campaign.

The 26-year-old, who the Blues paid £1.5m to sign from Watford 12 months ago, has been restricted to just one start in the Championship this season.

Fabbrini has been used 23 times in all since making a permanent switch to St Andrew's Stadium a year ago but, according to the Birmingham Mail, an agreement is in place to offload him to Spezia for the long term.

It is claimed that a £1.3m move to the Serie B side could be completed in the summer, meaning that he will depart Birmingham without having scored a competitive goal for the club across his two spells.

Spezia's league rivals Frosinone were also thought to be in the running for ex-Watford and Middlesbrough ace Fabrini.

Read Next:
Birmingham midfielder to make Serie B move?
>

Enter your email address to subscribe to Sports Mole's free match previews newsletter! Updates are sent twice a week.
View our homepages for Diego Fabbrini, Football
Follow @SM_Birmingham to get every Birmingham headline from Sports Mole, and follow @SportsMole for the latest breaking news stories
Recommended Next on SM

Sutton drawn at home against Arsenal in FA Cup

Sutton drawn at home against Arsenal in FA Cup
2

Ulloa: 'Claudio Ranieri has betrayed me'
5

Sutton drawn at home against Arsenal in FA Cup
4

Sutton drawn at home against Arsenal in FA Cup

Bottas: 'I can deal with Mercedes pressure'