George Kruis ruled out of Six Nations with knee injury 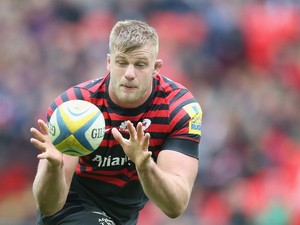 England lock George Kruis has been ruled out for the remainder of the Six Nations due to a knee injury.

The 26-year-old missed the opening match of England's defence - a narrow 19-16 win over France - having sustained knee ligament damage earlier this week.

The Saracens forward will now undergo surgery on the problem which will keep him out for up to 12 weeks, also putting his British and Irish Lions hopes in jeopardy.

"George will undergo surgery on Tuesday for a knee ligament injury sustained in training earlier in the week," read a statement from the Rugby Football Union.

"It is expected that the second row will require a 10-12 week rehabilitation period."

Joe Launchbury replaced Kruis alongside Courtney Lawes for the win over France.

View our homepages for George Kruis, Joe Launchbury, Courtney Lawes, Rugby Union
Follow @SportsMole for the latest breaking news stories, and follow @sm_headlines to get every headline from Sports Mole
Recommended Next on SM

Wenger: 'I will decide future soon'

Arscott: Sale sacking down to "bragging"

Eddie Jones ready to freshen up England side for Italy match

Sissoko: 'We will come back stronger'
5

Wenger: 'I will decide future soon'
6

Sanchez 'to quit after Arsenal row'
7

Manchester United 3-0 Saint-Etienne - as it happened
2

Gent 1-0 Tottenham Hotspur - as it happened
4

Mkhitaryan misses out for Man Utd
6

Sanchez 'to quit after Arsenal row'
8

Sissoko: 'We will come back stronger'
5

Root: 'I will be an instinctive leader'
> View all headlines
Tweets by @sportsmole

Sissoko: 'We will come back stronger'

Arscott: Sale sacking down to "bragging"

Root: 'I will be an instinctive leader'

Bottas: 'Hamilton welcomed me to team'

Gyan found to have "unethical hair" by UAE FA

Brett Rumford edges ahead in Perth

Haye hits back at Bellew over Miami jibe