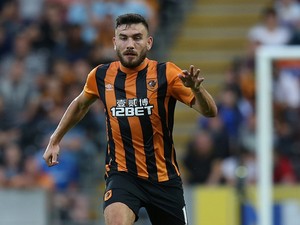 West Ham United have completed the signing of midfielder Robert Snodgrass from Hull City in a deal worth £10.2m.

The Scotland international was the subject of successful bids from both the Hammers and Burnley, while fellow Premier League side Middlesbrough fell just short with their valuation for the player.

It emerged on Thursday evening that Snodgrass had opted for East London over a switch to Lancashire, and a move has now been sealed following discussions over personal terms and the completion of a medical this evening.

Jack Sullivan, the son of West Ham co-owner David Sullivan, initially confirmed the transfer on Twitter when posting: "robert snodgrass has signed for £10million. Our second signing for the window he has 7 goals and 3 assists in 20 PL games this year."

United then revealed further details of the transfer on their website, announcing that a three-and-a-half year deal had been signed by the 29-year-old.

Snodgrass joined Hull from Norwich City in 2014 and still had 18 months left to run on his deal at the KCOM Stadium.

Enter your email address to subscribe to Sports Mole's free daily transfer newsletter! Sent twice a day during the transfer window.
View our homepages for Robert Snodgrass, Jack Sullivan, David Sullivan, Football
Follow @SMWestHam to get every West Ham headline from Sports Mole, and follow @SportsMole for the latest breaking news stories
Recommended Next on SM

Dimitri Payet: "I do not have to justify my behaviour"

Sutton United to host Arsenal in FA Cup fifth round

Sunderland 0-0 Tottenham Hotspur - as it happened
6

Ivanovic lands in Russia ahead of move
10

Wolff: 'F1 must not give up on hybrid engines'