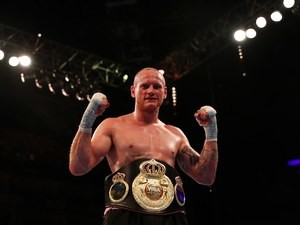 George Groves has revealed that he intends to face Fedor Chudinov rather than entertain an opportunity to face James DeGale in his next fight.

Earlier this month, DeGale said that he would be prepared to put his IBF super-middleweight title on the line against his long-time rival, but Groves has insisted that he is only focused on a meeting with Chudinov.

Groves is currently entitled to a clash against the Russian for the WBA title and while he hopes to earn a second professional win over DeGale later in his career, he has played down the efforts of his fellow Brit to try to entice him into a bout in London.

The 30-year-old told Sky Sports News: "It's been mentioned a few times. I think the best of five has been branded around. Already posters getting made up. It will be a great fight.

"I'm only going to concentrate on what I know is in front of me and that's Chudinov, and that's the WBA title, which is perfect for me.

"I had a long, hard slog last year, worked hard to grind myself into this situation. Once I win that, then there are huge fights out there to be made, but never rule anything out. I've learned that in my few years of boxing."

Groves has failed in three attempts to win a world title in the 168lbs division, losing twice to Carl Froch and once to Badou Jack.

Mayweather "would love to work" with DeGale

Buglioni eager to make most of world title chance
Your Comments

Aubameyang leads the line for Dortmund
8

Man City into second with win at Bournemouth
5

Aubameyang leads the line for Dortmund
2

Eddie Jones ready to freshen up England side

Bottas not settling for second place