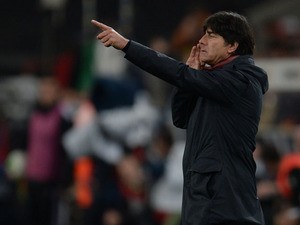 Mesut Ozil got on the scoresheet for Germany in Stuttgart a matter of hours after he hit back at his critics following a disappointing start to the season for Arsenal.

The midfielder nabbed the first goal in a 6-0 rout over Norway this evening, which has secured Germany's position at the top of Group C ahead of next summer's World Cup in Russia.

The current champions went 3-0 up within the first 22 minutes, and it was Ozil who opened the floodgates with a first-time strike from inside the box.

Toni Kroos came close to doubling Germany's lead two minutes later when the Real Madrid midfielder unleashed a shot in the danger area, but his attempt went wide of the post.

Ozil was involved in the third goal when his pass to Julian Draxler ended with the ball nestling into the bottom corner, which put Norway on the ropes for the rest of the match.

Goals continued to fly into the net, and one man in particular who shined was Timo Werner, who scored twice - the first was a simple tap-in, while the second came from a close-range header.

Kroos tried to join the party with a shot aiming for the bottom left corner, but Rune Jarstein stretched across to make a save, although the same could not be said five minutes later when Leon Goretzka leapt into the air to header home a fifth goal.

The sixth and final glory moment for Germany came from another header, this time created by substitute Mario Gomez, who beat Jarstein after getting on the end of Joshua Kimmich's cross.

Joachim Low's team have won all eight of their qualifiers.

Read Next:
Joachim Low: 'PSG will not sell Draxler'
>

Ozil ruled out of friendly against England

Arsenal chief exec: 'We have improved'

Benitez to take helicopter to Swansea?
2

Barcelona 5-0 Espanyol - as it happened
6

Manchester City 5-0 Liverpool - as it happened
7

Everton 0-3 Tottenham - as it happened
1

Leicester 1-2 Chelsea - as it happened
3

Manchester City 5-0 Liverpool - as it happened
4

Barcelona 5-0 Espanyol - as it happened
5

Arsenal 3-0 Bournemouth - as it happened
6

Everton 0-3 Tottenham - as it happened
7

Benitez to take helicopter to Swansea?
9

Result: Nadal to face Anderson in US Open final

Jones: 'Guardiola made me a better coach'

Arsenal CEO to be grilled by disgruntled fans?

Rory McIlroy out injured until 2018?

Jordan Spieth: 'I do not feel the pressure'