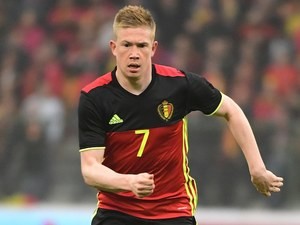 Belgium manager Marc Wilmots has named a strong side in Sunday's friendly against Norway, their last chance to prepare before competing in Euro 2016.

As Thomas Vermaelen is injured, the Red Devils coach has named the Tottenham Hotspur centre-back pairing of Jan Vertonghen and Toby Alderweireld, while Roma's Radja Nainggolan returns from injury to line up in midfield.

Hull City's Adama Diomande, who spent the first half of last season in his native Norway, is chosen in attack for his side, having played his part in the Tigers' promotion to the Premier League by bagging three goals in the final four months of the season.

Follow all the action from the King Baudouin Stadium with Sports Mole's live match commentary.

Read Next:
Romelu Lukaku: 'I am among world's best'
>

Romelu Lukaku: 'I am among world's best'

Eden Hazard "99%" sure of Chelsea stay

Falcao set to return to AS Monaco
5

Parlour: 'Jamie Vardy to Arsenal is off'
3

Falcao set to return to AS Monaco
9

Parlour: 'Jamie Vardy to Arsenal is off'

Rafael Nadal ruled out of Wimbledon

Farrell in at 10, Ford out for England

Sri Lanka fight back against England

Cook: 'Match-fixers should get life bans'