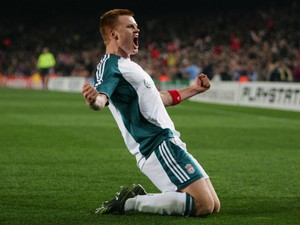 The 35-year-old admitted via his official website that he no longer has the ability to compete at the best level.

Riise made more than 250 appearances for Liverpool during a seven-year spell, in which he won the Champions League, FA Cup and League Cup.

The Norwegian went on to play for Roma, Fulham, APOEL, Delhi Dynamos and Aalesund, where he began his career in 1996.

In a blog post, Riise wrote: "I do not quite know how to begin on this blog post. But it will be about elite sport, motivation and it feels like my life's most important decision. And heaviest. I actually decided to resign my job. Cancelling the contract with Aalesund. And it does not happen after next season, or after this. It is happening now, today, in the middle of the season.

"I like to play football, but the motivation is still not strong enough to run the race at the highest level. This body, and this head, has been through so much over the last 20 years."

Riise is the most-capped player for Norway having run out 110 times for his country.

Read Next:
Gerrard plays for Liverpool in 'legends' match
>

Enter your email address to subscribe to Sports Mole's free match previews newsletter! Updates are sent twice a week.
View our homepages for John Arne Riise, Football
Follow @SM_Liverpool to get every Liverpool headline from Sports Mole, and follow @SportsMole for the latest breaking news stories
Recommended Next on SM

Federer: 'I must make improvements ahead of Wimbledon'
4

Bale: 'Wales are over England defeat'
6

Lowry: 'I feel comfortable at Oakmont'
8

Federer: 'I must make improvements ahead of Wimbledon'
3

Lowry: 'I feel comfortable at Oakmont'
4

Bale: 'Wales are over England defeat'
5

Federer: 'I must make improvements ahead of Wimbledon'

Lowry: 'I feel comfortable at Oakmont'

Bale: 'Wales are over England defeat'

Federer: 'I must make improvements ahead of Wimbledon'

Lowry: 'I feel comfortable at Oakmont'

Thunderstorms hamper US Open first round