Salvatore Sirigu latest goalkeeper to be linked with Chelsea move 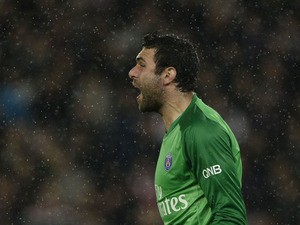 Chelsea have reportedly turned their attention to signing Salvatore Sirigu from Paris Saint-Germain as their search for a new back-up goalkeeper goes on.

Blues boss Antonio Conte says that he is willing to let Asmir Begovic depart this month should he find a suitable deputy to compete for Thibaut Courtois's No.1 shirt.

Having already been linked with Craig Gordon of Celtic and Newcastle United stoppers Karl Darlow and Tim Krul, Chelsea are said to have had no luck and could now make a formal approach for Sirigu.

The Sun claims that the 30-year-old, who is currently on loan at Sevilla, can be lured from PSG for a bid of £3m - the same sum Celtic knocked back for Gordon.

Sirigu won three Ligue 1 titles with the French giants as first-choice keeper, before losing his place to Kevin Trapp and being sent out on loan for the season.

Read Next:
Conte: 'Begovic can leave if replacement found'
>

Tottenham 1-0 Middlesbrough - as it happened
3

Sanchez to replace Griezmann at Atletico?
6

Everton 6-3 Bournemouth - as it happened
7

Palace 0-4 Sunderland - as it happened
8

Tottenham 1-0 Middlesbrough - as it happened
5

Everton 6-3 Bournemouth - as it happened
6

Palace 0-4 Sunderland - as it happened
7

Sanchez to replace Griezmann at Atletico?
2

Sanchez to replace Griezmann at Atletico?

Evans: 'I will respect Shapovalov in Davis Cup'

Hartley 'in a good place' ahead of Six Nations

Root: 'We deserve to win series over India'

'No disasters' as Haas prepares for season two

Top PL clubs in talks for own TV deals?

Hearn keen for Smith to fight at Anfield