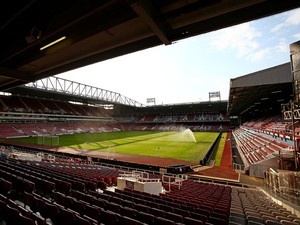 © Getty Images
West Ham joint-chairmen David Sullivan and David Gold urge fans to stay off the pitch after their final game at the Boleyn Ground next week.
By Pascal Lemesre, Football League Editor
Filed: Tuesday, May 3, 2016 at 22:09 UK

West Ham United co-chairmen David Gold and David Sullivan have urged Hammers fans not to invade the pitch after next week's final competitive match at the Boleyn Ground.

The East London side are moving to the Olympic Stadium next season after 112 years at Upton Park.

Their final home match is against Manchester United next Tuesday, and Gold and Sullivan have asked supporters to remain in their seats after the final whistle so as to not interfere with the post-match plans.

"We want it to be an evening that is ultimately about you, our loyal supporters, as it is you who have made the Boleyn Ground famous the world over," the co-chairmen said on the club website.

"But to make it special we need your support. Any incursions on to the pitch will certainly mean cancelling the current squad's richly-deserved lap of appreciation and denying some of our greatest ever players the chance to take the field for the final time.

"That would be a tragedy; for them and the Boleyn Ground. If we can present the post-match ceremonies as planned, we are sure you will walk away from Upton Park on Tuesday prouder than ever of the club you support."

Around 450 former players have been invited to help mark the occasion with a special closing ceremony.

Enter your email address to subscribe to Sports Mole's free match previews newsletter! Updates are sent twice a week.
View our homepages for David Gold, David Sullivan, Football
Follow @SMWestHam to get every West Ham headline from Sports Mole, and follow @SportsMole for the latest breaking news stories
Recommended Next on SM

Barcelona, Real to battle for title
5

Swansea board to discuss Guidolin future
10