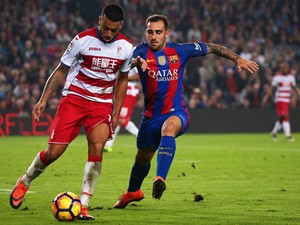 Suarez and Sergi Roberto were both sent off in the second leg of Barcelona's semi-final victory over Atletico Madrid and consequently miss out this evening as Enrique makes four changes to the side which beat Eibar on the final day of the season last weekend.

Jasper Cillessen, Javier Mascherano and Gerard Pique also come back into the starting XI as Marc Andre ter-Stegen and Marlon join Alba and Suarez in dropping out.

The match will be Enrique's last in charge of Barcelona before he takes a sabbatical, and the Spaniard could win a ninth trophy of his three years at the helm with victory.

Barca have won the competition for the past two years, but Alaves are appearing in their first ever Copa del Rey final and their first major final at all since their 5-4 extra-time defeat to Liverpool in the 2001 UEFA Cup.

Mauricio Pellegrino makes five changes to the side that drew with Leganes on the final day of the La Liga season, including Deyverson leading the line.

Rodrigo Ely, Theo Hernandez, Edgar Mendez, and Manu Garcia also come into the starting lineup as Alaves look to condemn Barca to a season without a major trophy.

Catch all of the action in the final ever match at the Vicente Calderon courtesy of Sports Mole's minute-by-minute coverage of the match.

Read Next:
Enrique: 'Neymar has grown in maturity'
>

Enrique: 'Neymar has grown in maturity'

Konta out of Eastbourne with back injury

Gatland: 'I couldn't devalue the jersey'

Gatland: 'Lions can have no complaints'

Result: New Zealand too strong for Lions in opener

Ronaldo leaves Portugal camp to be with twins

Hughie Fury back in ring next month