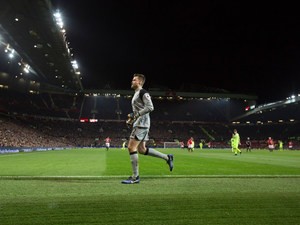 © SilverHub
Liverpool goalkeeper Simon Mignolet is pleased with his form this season having won his place in the starting lineup back from Loris Karius.
By Barney Corkhill, Staff Reporter
Filed: Monday, January 16, 2017 at 22:59 UK

Liverpool goalkeeper Simon Mignolet has said that he is pleased with his form so far this season.

The 28-year-old started his side's first five league games of the campaign but subsequently lost his place in the team when summer signing Loris Karius returned from a hand injury.

However, a string of mistakes from Karius saw Mignolet reinstated last month, and he has since kept his spot in the team with a number of improved performances.

"Actually I feel like I am playing a good season. The strange thing is that I have been out of the team for a while but I feel I am in a good moment," he told reporters.

"I just try to do my job, stay calm and will try to do the same things the next time I play. I am happy with my own performance but that is not really important.

"Of course I want to play every game but at a club like Liverpool it is normal there is going to be competition for every single place. There is only one keeper who can play."

Mignolet is expected to be rested for Liverpool's FA Cup third-round replay with Plymouth Argyle on Wednesday night.

Enter your email address to subscribe to Sports Mole's free match previews newsletter! Updates are sent twice a week.
View our homepages for Simon Mignolet, Loris Karius, Football
Follow @SM_Liverpool to get every Liverpool headline from Sports Mole, and follow @SportsMole for the latest breaking news stories
Recommended Next on SM

Liverpool to be without Matip for a month?

Result: Swansea City stun Liverpool at Anfield to climb out of bottom three

Liverpool 2-3 Swansea City - as it happened
5

Liverpool 2-3 Swansea City - as it happened
4

Sunderland bottom as Baggies march on
6