Exeter Chiefs will face Saracens in the Aviva Premiership final after beating Saracens 34-23 at Sandy Park on Saturday afternoon.
By Daniel Lewis, Football League Correspondent
Filed: Saturday, May 21, 2016 at 17:08 UK

Exeter Chiefs have defeated Wasps 34-23 at Sandy Park to set up their first ever appearance in the Aviva Premiership final.

The hosts, who had never previously reached this last-four stage, held on at the end to remain on track for some club history.

Exeter will now meet newly-crowned European champions Saracens in the final, following an entertaining semi-final clash that saw Rob Baxter's men do just about enough to get the job done. 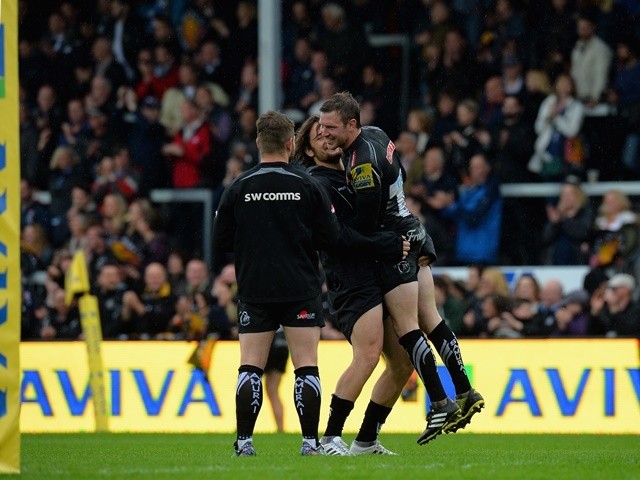 A couple of Gareth Steenson penalties saw the Chiefs open up a lead early on, but Wasps soon hit back when Carlo Festuccia crossed over at the end of a driving maul.

Momentum swung back Exeter's way 21 minutes in when Ian Whitten scrambled through following Jack Nowell's initial break, which Steenson was able to convert from.

There was a little let-off for Exeter when scrum-half Will Chudley appeared to kick the head of Joe Launchbury without sanction, yet just moments later Dan Robson found the chalk from close range thanks to some fine interplay from the forwards.

Exeter were rewarded for their attacking play on the brink of half time when referee Greg Garner lost patience with the visitors' defence and awarded a penalty try.

Garner again found the sticks from the follow-up, and worse was to come for Wasps as Carlo Festuccia was shown a yellow card by Garner.

Kiwi fly-half Jimmy Gopperth dragged Wasps back within three points of the Chiefs with his first successful pen of the afternoon, just moments before Dave Ewers used every inch to reach over and open the hosts' advantage back up.

A couple of straightforward Gopperth kicks ensured that it was not quite all over heading into the final stages of the match, but any home nerves were finally settled when another penalty try was awarded in the dying stages, allowing Steenson to blast over once more.

That proved to be it in terms of the scoring, meaning a first final appearance for Exeter to look forward to next week.

Read Next:
Rugby Player of the Season shortlist revealed
>

Wenger to make announcement on his future

Henry Slade out of Six Nations

Bournemouth 2-0 Swansea City - as it happened
3

Wenger to make announcement on his future
4

Keown: 'Writing on the wall for Wenger'
10

Bournemouth 2-0 Swansea City - as it happened
6

Wenger to make announcement on his future
8

Arsenal misery continues at The Hawthorns
9

Shakespeare: 'No secret to Leicester form'
4

Jones: 'Ireland were the better team'
7

Hartley: 'England not the finished article'
8

Keown: 'Writing on the wall for Wenger'
9

Shakespeare: 'No secret to Leicester form'

Jones: 'Ireland were the better team'

Hartley: 'England not the finished article'