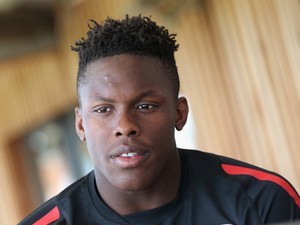 © Getty Images
With Joe Launchbury ruled out by a hamstring injury, Maro Itoje will make his full England debut against Ireland on Saturday.
By Liam Apicella, Features Editor
Filed: Thursday, February 25, 2016 at 10:11 UK

Maro Itoje will make his first ever start as an England international during Saturday's Six Nations clash against Ireland at Twickenham.

The 21-year-old from Saracens, who featured as a substitute against Italy last time out, has replaced the injured Joe Launchbury.

The other change that head coach Eddie Jones has opted to make has seen loose-head forward Joe Marler preferred to Mako Vunipola.

"Joe Launchbury is unlucky to miss out through injury. Maro Itoje is selected as result and we're pleased for him," said Jones.

"Joe Marler made a big impact off the bench in Rome and will start the game with Mako Vunipola finishing the match."

Elsewhere, Wasps centre Elliot Daly has been included as a replacement for the first time.

Ekeng passes away after collapsing on pitch
1

Simeone not looking for "revenge"
> View all headlines
Tweets by @sportsmole