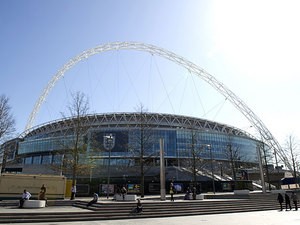 © Getty Images
The Football Association reveals that six games will be televised during the FA Cup fourth round on the final weekend in January.
By Darren Plant, Reporter
Filed: Friday, January 13, 2017 at 17:04 UK

The Football Association has announced that the East Midlands derby between Derby County and Leicester City will be one of six games televised during the FA Cup fourth round.

The clash between the two rivals will be screened by the BBC on Friday, January 27, before Wolverhampton Wanderers travel to either Liverpool or Plymouth Argyle in a game to kick off at 12.30pm on Saturday, January 28 on BT Sport.

Later that day, the same channel will show Norwich City or Southampton play Arsenal, before Sunday's offering gets underway with Millwall against Watford on the BBC.

BT Sport will then screen Leeds United's trip to either Sutton United or AFC Wimbledon, while a decision is still to be made regarding coverage on Sunday afternoon.

It has been revealed that the BBC will show either Manchester United against Wigan Athletic or Manchester City's trip to either Bolton Wanderers or Crystal Palace at 4pm.

Tottenham Hotspur to demand close to £200m for Harry Kane?

PFA announces Championship, League One and League Two Teams of the Year

Harry Kane 'unavailable at any price'
2

Harry Kane 'unavailable at any price'
9

Harry Kane 'unavailable at any price'

Gatland: 'Lions can have no complaints'

Result: New Zealand too strong for Lions in opener

Vettel under fire after Hamilton clash

Hughie Fury back in ring next month