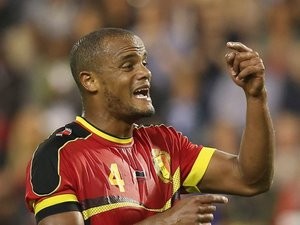 Manchester City and Belgium captain Vincent Kompany has been added to the BBC punditry team for its coverage of Euro 2016, which gets underway in France next week.

Kompany was due to guide his national side into the tournament, but a thigh injury has ruled him out of competing.

The 30-year-old defender will not be far away from the action, though, as he will provide insight and analysis as part of Gary Lineker's punditry panel, which includes Rio Ferdinand, Thierry Henry, Alan Shearer and Gianluca Vialli.

"I am extremely disappointed not to be in France with the Belgium team, but to be there with the BBC will be the next best thing," said Kompany.

"There is a huge amount of anticipation for the tournament and I'm really looking forward to working alongside Gary and the team throughout the competition."

BBC Head of TV Sport Philip Bernie said: "We have enjoyed working with Vincent as a guest on Match of the Day, and have been extremely impressed with the insight he offers.

"As a current player, he is very close to the game and has played against a number of the players and countries involved in Euro 2016. He will be the perfect addition to our impressive studio lineup, which already boasts an outstanding array of pundits, led by the best sports presenter on TV."

Kompany will be present in the studio to give his thoughts on Germany's opening group game against Ukraine on June 12, as well as the clash between Portugal and Austria on June 14.

The defender will also provide analysis for US broadcaster ESPN.

Nicolas Lombaerts out of Euro 2016

Team News: Marc Wilmots names strong Belgium side against Norway in final friendly before Euros
Result: Lukaku rescues draw for BelgiumRomelu Lukaku: 'I am among world's best'Kompany named BBC pundit for Euro 2016Nicolas Lombaerts out of Euro 2016Belgium name squad for Euro 2016
Vincent Kompany: 'I will miss Euro 2016'Hazard: 'I want to be star of Euro 2016'Report: Divock Origi out for up to six weeksNorthern Ireland up to 26th in FIFA rankingsArgentina 'top of new FIFA rankings'
> Belgium Homepage
Top Stories
Trending
Most Read
Most Recent
1

Belgium pushed all the way by Norway
9

Hazard has no intention of leaving Chelsea
1

Ramos: 'Spain will not be complacent'
4

Ramos: 'Spain will not be complacent'

Borthwick only concentrating on Durham

Hussain talks up Mills for England

Webber: 'Ricciardo will bounce back'

Neymar to star in Hollywood movie

Boxing reacts to the passing of Muhammad Ali