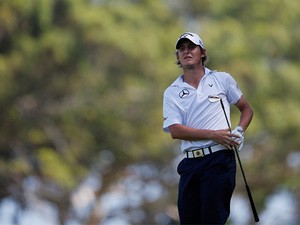 © Getty Images
Emiliano Grillo beats Kevin Na on the second hole of a playoff to triumph at the Frys.com Open.
By Callum Mulvihill, Reporter
Filed: Monday, October 19, 2015 at 10:36 UK

Emiliano Grillo secured his first PGA Tour title by beating Kevin Na in the second hole of a playoff at the Frys.com Open in California.

In his eighth event on tour and first as a full member, the 23-year-old triumphed in a dramatic finish on the opening weekend of the new season as the chasing pack capitalised on a lifeline in the fourth round.

Brendan Steele had been in control at the top of the leaderboard for most of the event, but he threw away his chances of victory after carding five bogeys in six holes on the back nine.

Grillo posted a final round of three-under thanks to a 25-foot putt on the final hole, before Na joined him on 15-under for the tournament when his excellent pitch set up a birdie as his rival looked to be closing in on the win.

The Argentine missed the chance to clinch the title when he failed to hole a putt from inside three feet, but he held his nerve on the second playoff hole to birdie as Na failed to save par following a wayward tee shot.

Tyrone van Aswegen, Justin Thomas and Jason Bohn settled for a tie for third spot, while Justin Rose was among a group of four players who finished on 12-under.

Result: Merritt holds on to clinch win in Virginia

Arsenal to move for Vincent Janssen?
5