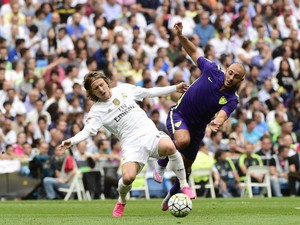 The 28-year-old will arrive at Vicarage Road from Malaga, for whom he has made over 60 appearances over the last three seasons.

Speaking earlier in the week about the Morocco international, Watford head coach Quique Flores said: "He has the qualities of the players we like.

"He can play at number 10, he holds the ball, he can turn quickly with the strength of a striker and escape the defensive line.

"He can also play as a winger because he has that pace and velocity - the power that adds to the options of a team."

Amrabat has played for a host of clubs during his career, including PSV Eindhoven and Galatasaray.

Enter your email address to subscribe to Sports Mole's free daily transfer newsletter! Sent twice a day during the transfer window.
View our homepages for Nordin Amrabat, Quique Flores, Football
Follow @SMWatford to get every Watford headline from Sports Mole, and follow @SportsMole for the latest breaking news stories
Recommended Next on SM

Simeone not looking for "revenge"
> View all headlines
Tables