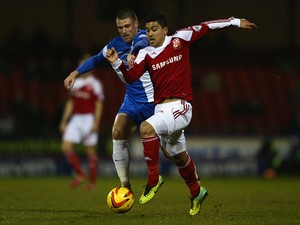 Swindon Town secured a 3-1 win in their first game of the season after putting three past Scunthorpe United in the first half.

Swindon took the lead four minutes into the game as Nathan Byrne squared to Massimo Luongo, who poked the ball in to give the Robins the perfect start.

Things got even better when Michael Smith was picked out by Louis Thompson to finish from six yards out to double their lead.

Scunthorpe replied quickly to get themselves back in the game as Deon Burton's flick-on found Paddy Madden who powered through to finish in the 20th minute.

The Robins retrieved their two-goal advantage deep into first-half stoppage time as a Ben Gladwin strike hit the post, only to bounce off Smith, who got his second of the game to make it 3-1.

The Iron's day got worse as Marcus Williams was given a straight red card after shoving a Swindon player in stoppage time.

Barnsley duo up for February awards

Northern Ireland 1-0 Slovenia - as it happened
4

Ukraine squeeze past Wales in Kiev
6

Northern Ireland 1-0 Slovenia - as it happened
10

O'Neill: 'Conor Washington is an asset'
5

Deschamps: 'Attacks still on our minds'
> View all headlines
Tweets by @sportsmole
Tables

O'Neill: 'Conor Washington is an asset'

Result: Konta through to last 16 in Miami

Jamie Murray to be world number one

Blackwell in hospital with 'bleed on the brain'

No surgery planned for Nick Blackwell