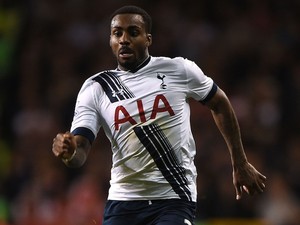 © Getty Images
Danny Rose apologises after brawls break out between Tottenham Hotspur and Chelsea players during their clash at Stamford Bridge.
By Danielle Joynson, Staff Reporter
Filed: Tuesday, May 3, 2016 at 13:32 UK

Tottenham Hotspur full-back Danny Rose has apologised for the team's conduct during a fiery encounter against Chelsea, which ended Spurs' hopes of winning the Premier League title.

Frustrations boiled over, sparking numerous brawls, one of which resulted in Chelsea interim manager Guus Hiddink tumbling to the ground as the unsavoury scenes continued into the tunnel after the final whistle.

Spurs could be hit with retrospective action by the Football Association, particularly as Mousa Dembele was spotted on camera eye gouging Diego Costa.

"It is not nice to see for kids here or kids watching on TV," The Guardian quotes Rose as saying. "I apologise if it looked bad on TV.

"It is a London derby. It is to be expected. We wanted to win and they wanted to stop us having any more say in the title race. There are no bad words to say about Chelsea. These are the games you want to be part of. It was a great game.

"I couldn't tell you what happened [in the tunnel], it was just handbags being thrown. I saw the Chelsea manager fell on the floor. I hope he is alright. People were saying from the bench that he conducted himself like a true gentleman throughout the whole game. He did not want any trouble to be started."

Barcelona, Real to battle for title
1

Hearn: 'Crolla win one of best ever seen in Britain'
5

Anya disappointed with defeat to Liverpool
8