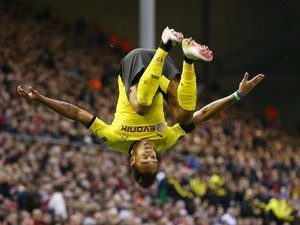 © Getty Images
Borussia Dortmund striker Pierre-Emerick Aubameyang admits that he would like to play in Spain one day, suggesting that Real Madrid would be his preferred destination.
By Pascal Lemesre, Football League Editor
Filed: Tuesday, May 3, 2016 at 22:35 UK

Borussia Dortmund's star striker Pierre-Emerick Aubameyang has suggested that he could play in La Liga one day.

The 26-year-old's form this season, during which he has scored 39 goals in all competitions, has reportedly attracted interest from top clubs across Europe.

The Gabon international has previously admitted that he would be keen on playing for Real Madrid one day, and also recently hinted at a move to the Premier League.

Although he reiterated that he has four more years to run on his contract, he did not completely rule out a move to Spain.

"I am focused on finishing the season with my team. We do not know what can happen, but I have a contract until 2020," he told Cadena Cope.

"I've always said it would be a dream for me to play in Spain, I do not know when. I cannot say [where that will be] because I do not know how things are, but I have more family links to Madrid than Barcelona.

"And yes, I like Real Madrid a little more than Atletico."

Enter your email address to subscribe to Sports Mole's free match previews newsletter! Updates are sent twice a week.
View our homepages for Pierre-Emerick Aubameyang, Mats Hummels, Football
Follow @SMRealMadrid to get every Real Madrid headline from Sports Mole, and follow @SportsMole for the latest breaking news stories
Recommended Next on SM

Ronaldo to join PSG should he leave Real Madrid?

Danny Welbeck out for nine months
8

Lascelles: Newcastle must "come back stronger"
9

Ronaldo to join PSG should he leave Real Madrid?
9

Hiddink: 'I won't give any advice to Conte'
1

Lascelles: Newcastle must "come back stronger"
6

Lascelles: Newcastle must "come back stronger"