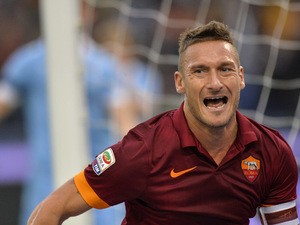 Pescara boss Zdenek Zeman has opened the door for Francesco Totti to remain in Italian football by offering the experienced forward a trial with the Serie B-bound outfit.

Totti, 40, ended an iconic 24-year career at Roma when he departed the capital outfit at the end of the 2016-17 campaign.

It has been claimed that the Italian is considering accepting a director role with Roma, although Zeman has offered the forward the chance to continue as a professional player.

"Totti still wants to play, and they want him over in the USA," said Zeman told Radio Due. "He shouldn't be going into any ambassadorial role just yet, he needs to play and I hope he can do so in a major team.

"I spoke with him last week and he still wants to play, but it all depends on the conditions. I believe he still wants a competitive challenge, and to that end I'm always happy to give him a trial."

Totti made his Roma debut at the age of 16, and went on to make 786 appearances for the club, scoring 307 goals in the process.

Pescara, meanwhile, will play Serie B football next season after finishing bottom of Serie A last term.

Read Next:
Empoli relegated from Serie A
>

Enter your email address to subscribe to Sports Mole's free match previews newsletter! Updates are sent twice a week.
You May Like
Recomended from Sports Mole
View our homepages for Francesco Totti, Zdenek Zeman, Football
Follow @SportsMole for the latest breaking news stories, and follow @sm_headlines to get every headline from Sports Mole
Recommended Next on SM

Empoli relegated from Serie A

Muntari hits out at FIFA, UEFA

Azerbaijan 0-1 Northern Ireland - as it happened
4

Ronaldo 'welcomes the birth of twins'
7

Solanke: 'It's England's time to shine'
9

Salo: 'Bottas getting under Hamilton's skin'
6

Azerbaijan 0-1 Northern Ireland - as it happened
9

Ronaldo 'welcomes the birth of twins'
5

Obiang bidding to return for pre-season
6

Magnussen caught out by Haas contract
9

Ricciardo: 'No Ferrari switch for 2018'
> View all headlines
Tweets by @sportsmole

Ronaldo 'welcomes the birth of twins'

Obiang bidding to return for pre-season

Warburton to feature against Highlanders

Salo: 'Bottas getting under Hamilton's skin'

Magnussen caught out by Haas contract

Ronaldo 'welcomes the birth of twins'

Phil Mickelson withdraws from US Open