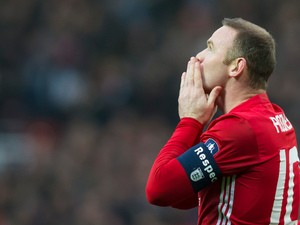 © SilverHub
Wayne Rooney will reportedly bring his 13-year spell at Manchester United to an end in the summer, with Chinese Super League clubs willing to offer him £1m a week.
By Daniel Lewis, Football League Correspondent
Filed: Friday, January 27, 2017 at 22:39 UK

Manchester United captain Wayne Rooney is to leave the club at the end of the season and join a Chinese Super League side, according to a report.

The 31-year-old is said to be ready to bow out of Old Trafford in the summer after achieving his long-running ambition of becoming the Red Devils' record scorer.

It is claimed by The Sun that Rooney, who achieved that impressive scoring feat with a late goal against Stoke City last weekend, has been offered as much as £1m a week to make a switch to the Far East.

Ambitious clubs in China are willing to go all out to lure the iconic figure to the league, and after reportedly failing to receive any sort of offer from a Major League Soccer side - his preferred option - Rooney is ready to cash in for what will potentially be a final payday.

England international Rooney has not been first choice for club or country since September, starting just eight league games for United in all, and is now into the final 18 months of his £250,000-a-week contract at Old Trafford.

Read Next:
Rooney "would love" to go into management
>

Enter your email address to subscribe to Sports Mole's free match previews newsletter! Updates are sent twice a week.
View our homepages for Wayne Rooney, Football
Follow @SMManUtd to get every Man Utd headline from Sports Mole, and follow @SportsMole for the latest breaking news stories
Recommended Next on SM

Rooney "would love" to go into management

Sutton United to host Arsenal in FA Cup fifth round

Wenger: 'We were not mentally prepared'
1

Ivanovic lands in Russia ahead of move
10

Wenger: 'We were not mentally prepared'
8

Wolff: 'F1 must not give up on hybrid engines'