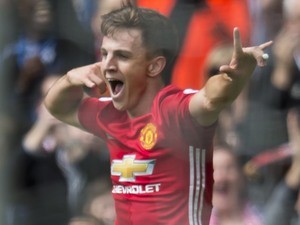 Manchester United have confirmed that young midfielder Josh Harrop will join Championship side Preston North End when his current deal expires at the end of the month.

The 21-year-old is best known for his debut strike against Crystal Palace on the final day of the 2016-17 Premier League season when given a rare chance by boss Jose Mourinho.

Harrop, who top-scored for the Red Devils' reserve side last term with 10 goals to his name, is to seek pastures new when the transfer window officially opens on July 1, despite recently being tipped to sign a new deal at Old Trafford.

Preston, gearing up for a potential promotion push in the second tier next season, also have former United players Marnick Vermijl, Ben Pearson and Liam Grimshaw on their books.

Zlatan Ibrahimovic is the highest profile of the Premier League club's summer departures, being allowed to leave after his contract expired.

Enter your email address to subscribe to Sports Mole's free daily transfer newsletter! Sent twice a day during the transfer window.
You May Like
Recomended from Sports Mole
View our homepages for Josh Harrop, Jose Mourinho, Liam Grimshaw, Marnick Vermijl, Ben Pearson, Zlatan Ibrahimovic, Football
Follow @SMManUtd to get every Man Utd headline from Sports Mole, and follow @SportsMole for the latest breaking news stories
Recommended Next on SM

Ikeme thanks football world for support

Win two tickets to Middlesex vs. Sussex in the T20 Blast

Ikeme thanks football world for support

Spieth: 'I got more than I deserved'

US PGA Championship coverage to return to BBC?

Klitschko: 'I have achieved my dreams'