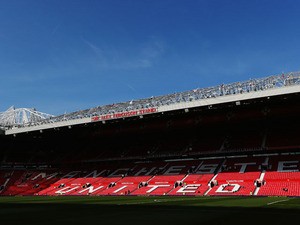 The derby between Manchester United Under-21s and their Manchester City counterparts on Tuesday evening has been marred by crowd trouble.

Unrest broke out in Old Trafford's J stand, with heated exchanges between the two sets of supporters forcing stewards to intervene, reports The Mirror.

A pitch invader later entered the field of play before being ushered off by United's Liam Grimshaw.

United won the clash 4-0 in front of 16,000 supporters, who took advantage of free admission, to take a step closer to the Under-21s league title.

Enter your email address to subscribe to Sports Mole's free daily transfer newsletter! Sent twice a day during the transfer window.
View our homepages for Liam Grimshaw, Football
Follow @SMManCity to get every Man City headline from Sports Mole, and follow @SportsMole for the latest breaking news stories
Recommended Next on SM

Who impressed in Under-21 Premier League final?

Neilson: 'McGhee will learn from his mistake'
Your Comments
More Manchester City News

Deportivo 0-8 Barcelona - as it happened
2

Real Madrid 3-0 Villarreal - as it happened
3

Liverpool 4-0 Everton - as it happened
5

Sturridge misses out for much-changed Liverpool
10

Deportivo 0-8 Barcelona - as it happened
2

Real Madrid 3-0 Villarreal - as it happened
3

Liverpool 4-0 Everton - as it happened
5

Petrov not surprised by Agbonlahor conduct
10

Barry urges Everton to bounce back
2

Bilic: "We are victims of our success"
10

Van Gaal: 'We should have scored more'
> View all headlines
Tweets by @sportsmole
Tables

Barry urges Everton to bounce back

Result: Nadal breezes through in Barcelona

Becker hits out at Murray over doping remarks

Raikkonen: 'Too soon for contract talks'

Blackwell has "no hard feelings" towards Eubank Jr