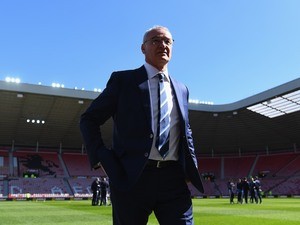 © Getty Images
Leicester City manager Claudio Ranieri says that he will target a top-10 finish next season, despite the club being crowned Premier League champions.
By Danielle Joynson, Staff Reporter
Filed: Tuesday, May 3, 2016 at 12:32 UK

Claudio Ranieri has claimed that he and his Leicester City team will target a top-10 finish in the Premier League next season, despite heading into the campaign as champions of England.

The Foxes earned their first top-flight title in the club's 132-year history last night after Chelsea knocked Tottenham Hotspur out of the race with a 2-2 draw at Stamford Bridge.

This time last year, Leicester were fighting their way out of relegation with former manager Nigel Pearson, but this season, Ranieri has transformed the Foxes into shock title winners.

Despite their remarkable achievement, Ranieri has played down his team's chances for next season as he believes that a top-10 finish should be the target.

When asked by Sky Sports News if Leicester could repeat their title success, Ranieri said: "No. I think no, but of course we want to continue to build. When I came here the project was to build a very good foundation.

"This season is out of our project but the foundation is solid. We know very well next season we have to fight for 10th position and higher. We want to do our very best and we want to fight. [We want to] make a good campaign in Europe, in the Cup and also to be sure that we are safe next season."

Leicester won the title with two games left to play, and captain Wes Morgan will lift the trophy with his teammates after Saturday evening's game against Everton at the King Power Stadium.

Enter your email address to subscribe to Sports Mole's free daily transfer newsletter! Sent twice a day during the transfer window.
View our homepages for Claudio Ranieri, Nigel Pearson, Wes Morgan, Football
Follow @SMLeicester to get every Leicester headline from Sports Mole, and follow @SportsMole for the latest breaking news stories
Recommended Next on SM

Ranieri: Leicester "deserve to be champions"

Black: 'Championship will be very difficult'

Hearn: 'Crolla win one of best ever seen in Britain'
8

Hearn: 'Crolla win one of best ever seen in Britain'
2

Anya disappointed with defeat to Liverpool
5

Anya disappointed with defeat to Liverpool