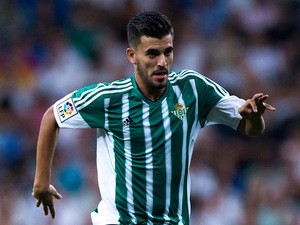 Juventus have reportedly joined Barcelona and Real Madrid in the pursuit of Real Betis midfielder Dani Ceballos, who is widely expected to leave his Spanish club ahead of the 2017-18 campaign.

Real Madrid have been strongly linked with a move for the midfielder in recent days, although Betis president Angel Haro has denied that Los Blancos have already activated Ceballos's £10.5m release clause.

Barcelona have since been credited with an interest in the 20-year-old, but the player himself has revealed that he will sit down with Betis boss Quique Setien before deciding his future.

According to Mundo Deportivo, Juventus have already approached Betis over the signing of the Spain Under-21 international, who was named the Player of the Tournament at the European Under-21 Championships this summer.

Ceballos, who has vowed to 'take his time' before deciding his future, scored twice and registered two assists in 30 La Liga appearances last season.

Enter your email address to subscribe to Sports Mole's free match previews newsletter! Updates are sent twice a week.
You May Like
Recomended from Sports Mole
View our homepages for Dani Ceballos, Angel Haro, Quique Setien, Football
Follow @SportsMole for the latest breaking news stories, and follow @sm_headlines to get every headline from Sports Mole
Recommended Next on SM

Federico Bernardeschi: "Who wouldn't like to play for Juventus?"

Konta: 'I can win Wimbledon one day'

Result: Konta out of Wimbledon at semi-final stage

England in control at end of day three

Vettel: 'Ferrari can improve in qualifying'

Defoe back in UK for Bradley Lowery funeral

Ian Poulter qualifies for The Open

McGregor vows to knock Mayweather out in four