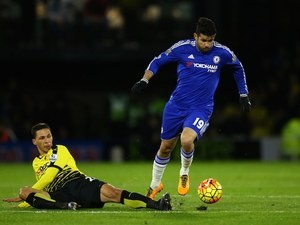 © Getty Images
Relive the goalless draw between Watford and Chelsea at Vicarage Road as the visitors continue their unbeaten start to life under Guus Hiddink.
By Barney Corkhill, Staff Reporter
Filed: Wednesday, February 3, 2016 at 18:44 UK

Chelsea's unbeaten start to life under Guus Hiddink stretched to nine matches this evening courtesy of a goalless draw with Watford at Vicarage Road.

The hosts had the better of the first half but couldn't find a way past Thibaut Courtois, who made a number of routine saves to keep them at bay.

It was Heurelho Gomes who was the busier of the two keepers in the second half, however, putting in a man-of-the-match display to earn a point for the Hornets.

Find out how all of the action unfolded courtesy of Sports Mole's live minute-by-minute coverage below.

Sort:
Newest
Oldest
6.45pmGood evening! Thank you very much for joining Sports Mole for tonight's Premier League clash between Watford and Chelsea at Vicarage Road. Four points and four places separate these two sides in the table heading into this match, and that could increase to seven on both counts should the hosts emerge victorious. No side has beaten Hiddink's Chelsea yet this term, though. Let's start with a look at the two teams...
6.47pmWATFORD STARTING XI: Gomes; Paredes, Prödl, Cathcart, Holebas; Behrami, Watson, Capoue; Jurado; Deeney, Ighalo
6.47pmWATFORD SUBS: Pantilimon, Nyom, Anya, Suarez, Guedioura, Abdi, Amrabat
6.49pmCHELSEA STARTING XI: Courtois; Ivanovic, Zouma, Terry, Azpilicueta; Mikel, Matic; Willian, Fabregas, Oscar; Diego Costa
6.49pmCHELSEA SUBS: Begovic, Cahill, Baba Rahman, Loftus-Cheek, Kenedy, Traore, Hazard
6.51pmWhat can we make of those two teams, then? Well, there are no major surprises from either camp, with Quique Flores bringing a number of first-team players back in following their FA Cup involvement at the weekend. There are only two changes from their last Premier League game, with Britos missing out through illness and Nathan Ake ineligible to play against his parent club. From the win over Newcastle, Prodl and Holebas come in for them.
6.53pmProdl was part of the defence that kept a clean sheet against Nottingham Forest in the FA Cup on Saturday, however, and he once again partners Cathcart in central defence this evening. Nyom drops to the bench to be replaced by Paredes, while Holebas, as mentioned, is in for Ake. There is also a change between the sticks as first choice Gomes returns in goal, with January signing Costel Pantilimon among the subs.
6.55pmAlso among the subs for the Hornets today are a couple of other new faces. Nordin Amrabat started at the weekend but barely got a minute of action against Newcastle a week before that, and so is yet to truly get time on the field in the Premier League. Mario Suarez, meanwhile, could make his debut for the club following a £4m move from Fiorentina. He has to settle for a place on the bench to start with, as Behrami, Capore and Jurado all return to the starting XI, but he is expected to feature.
6.57pmThere is no doubt as to the stars for Watford this season, though. Deeney and Ighalo are arguably the most potent attacking duo in the league at the moment, scoring 20 of Watford's 27 league goals between them. Deeney has usual acted as the provider, laying on 26 goalscoring chances for Ighalo in the Premier League so far - more than any other player has laid on for a teammate in the entire division. Six of those have resulted in assists, while Ighalo has also netted seven times in his last seven league games at Vicarage Road. 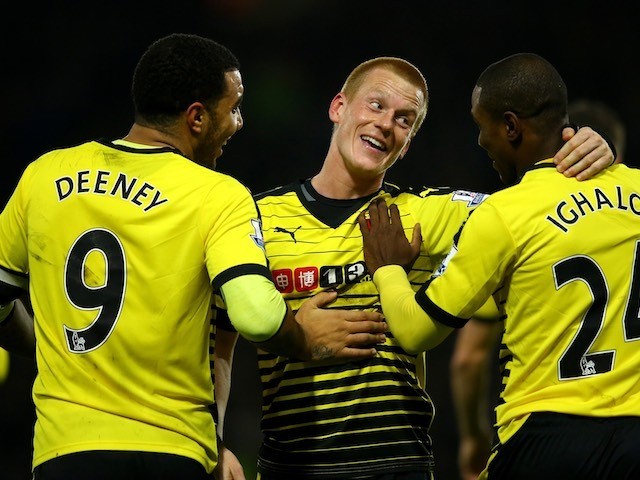 6.59pmCharged with stopping them this evening will be the Chelsea defence once again led by John Terry. I will talk more about the Blues' skipper a little later, but it is bound to be an emotional occasion for him as he makes his first appearance for the club since announcing that he will leave at the end of the campaign. Ivanovic, who was curiously handed a new deal when Terry was not, is the only other member of the back four to maintain his place from the weekend.
7.01pmThat means that Gary Cahill, who was linked with a move away during January, and Baba Rahman drop to the bench to be replaced by Zouma and Azpilicueta - a return to what appears to be Guus Hiddink's favoured back four. They will be protected tonight by the defensive shield of Matic and Mikel, and the fact that Hiddink is playing both of those is a big compliment to the danger posed by Watford. Both are defensive-minded players and certainly a more negative choice than having Fabregas in there.
7.03pmInstead, Fabregas has been pushed further up the field this evening alongside Willian and Oscar in the trio behind the striker. That, of course, means that there is no room for Eden Hazard, who interestingly drops to the bench despite having finally opened his account for the season against MK Dons at the weekend. The hero of that match was Oscar, who netted a first-half hat-trick and then allowed Hazard to take the penalty from which he ended his duck, and it is no surprise to see his compatriot Willian return alongside him. There were doubts over his fitness due to a bruised foot, but he has been deemed fit to replace Loftus-Cheek in the team.
7.05pmLeading the line, as ever is Diego Costa, who wasn't on the scoresheet at the weekend but has still scored six goals in seven matches under Guus Hiddink - a far cry from the form he showed under Mourinho during the first half of the season. He remains Chelsea's only real attacking option through the middle, at least when it comes to recognised centre-forwards, with Remy and Falcao - both of whom were linked with a deadline day move away from Stamford Bridge - currently injured. Pato, meanwhile, is not yet at match fitness. 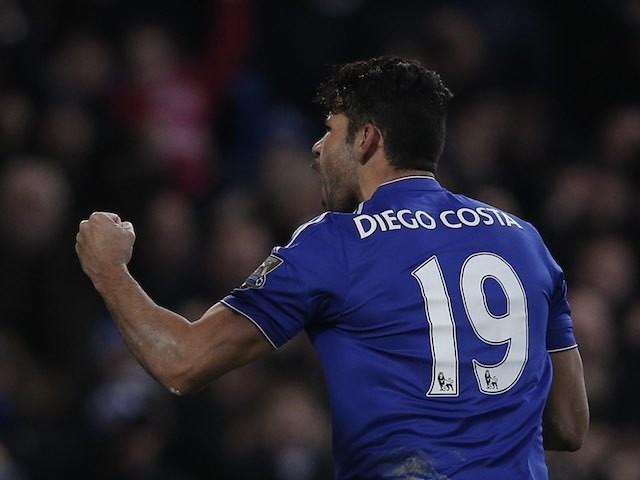 7.07pmAn in-form Costa is certainly not an easy thing for defenders to deal with, and Watford know that more than most having conceded two goals to him a little over a month ago. However, the Hornets will still be confident heading into this match having impressed so far this season, and victory tonight would send them as high as seventh in the table. Any finish in the top half would be a major achievement, but the European places are not yet out of bounds.
7.09pmThere was once even talk of a top-four push when Watford's 3-0 victory over Liverpool made it four wins on the bounce in the final match before Christmas, but their form has stuttered somewhat since then. They picked up just one points from the next 15 on offer in the Premier League - with that coming against tonight's opponents - and slipped back down into the bottom half of the table as a result. It was a reminder to the Hornets that things can change in an instant when it comes to the top flight.
7.11pmIt may have also reminded them that relegation is still not impossible. It does, however, look more and more improbable as the weeks go by. Watford returned to winning ways by beating Newcastle 2-1 11 days ago, ending a run of four straight defeats and taking them 11 points clear of the relegation zone. It is a position that they certainly would have taken at this stage of the campaign had they been offered it before the season began, but another poor spell of form could have them looking over their shoulders again.
7.13pmRight now, though, things are looking very promising for Quique Flores. Watford have already amassed 32 points this season, meaning that they need just eight from the final 15 games to reach the fabled safety mark of 40 points - something you'd have to say looks very likely to happen. Indeed, their current points tally is the best at this stage of a season from a newly promoted side since Birmingham City amassed 34 points from their opening 23 games in the 2009-10 campaign.
7.15pmWith that striking duo of Deeney and Ighalo, they seem as though they certainly have the goals to keep them away from danger, although they may need other players to step up too if they are to climb much higher. Only Stoke have scored fewer goals in the top half of the table, and the situation is even worse when it comes to their home form. Only struggling duo Swansea and Aston Villa have found the back of the net fewer times in front of their own fans this season, with Watford having scored more goals away from home, and in fewer games too.
7.17pmThey have been pretty sound defensively for the most part - only five teams in the entire league have conceded fewer goals, and they have kept clean sheets in half of their home matches this season - but home and away they have failed to keep a clean sheet in their last six Premier League outings. They did keep the opposition at bay on Saturday, however, edging Championship side Nottingham Forest 1-0 courtesy of Ighalo's late winner to send them into the last 16 of the FA Cup.
7.19pmVictory tonight would give the Hornets consecutive home victories in the Premier League for only the second time ever, with the first also coming this season when they beat Norwich and Liverpool in succession. They have won four of their last six home matches too, and have not been beaten at Vicarage Road by a side who were in the bottom half at the time - a position Chelsea currently occupy.
7.21pmChelsea's bottom-half status is more to do with their form over the first half of the campaign than it is their recent form, though. The Blues have improved under Guus Hiddink and, while the results are still not exactly perfect, nor even good enough to see them climb into the top half, the defeats have at least stopped. They come into this match unbeaten in their last nine outings, since Mourinho left the club, with eight of those coming under Hiddink. Their ongoing seven-match unbeaten Premier League streak was the joint-longest in the division before yesterday's matches.
7.23pmFor once, though, the main focus tonight will not be on Chelsea's form. Instead, much of it will be on John Terry, who begins his long goodbye at Vicarage Road tonight. It came as a big surprise when he announced that he would be leaving the club at the end of the season, insisting that his career would not have a "fairytale ending". Chelsea have since seemingly kept the door open for further negotiations, so his fate may not yet be completely sealed, but it does appear as though he is heading for the exit.
7.25pmIf that is the case, the skipper deserves all of the plaudits that will come his way over the closing months of the campaign. Tonight will be his 607th appearance for the club, during which time he has helped them to 14 major honours, including four league titles and the Champions League. He is arguably the finest defender the Premier League has ever seen - not to mention the highest-scoring one - and he will certainly be a loss to the Blues. 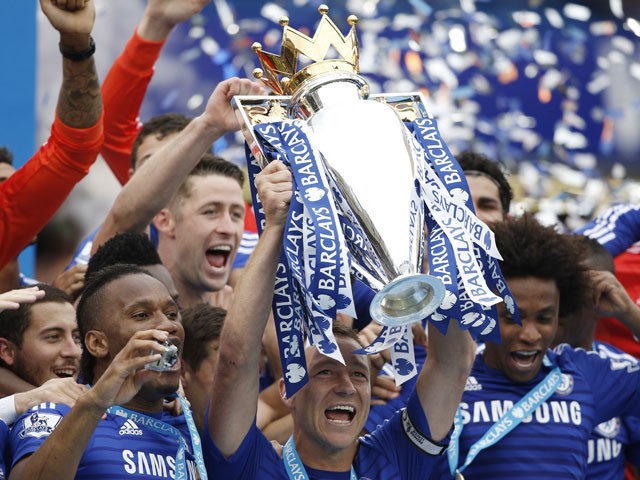 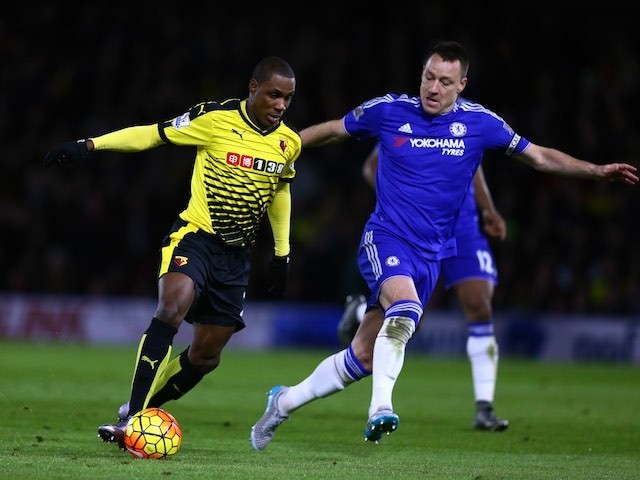 Pato in, Falcao out of Chelsea's CL squad

Chelsea's Eden Hazard ruled out of match against Aston Villa

Guus Hiddink: 'Thibaut Courtois is under contract at Chelsea and enjoys London'

Martinez not 'unsettled' by Lukaku's claims
4

Can England really go all the way in France?
8

Wenger: 'Staying Arsenal boss is not a surprise'
1

Ferguson: 'Pep will find it difficult'
10

Can England really go all the way in France?
4

Wenger: 'Staying Arsenal boss is not a surprise'
9

Martinez not 'unsettled' by Lukaku's claims
10

Can England really go all the way in France?

Verstappen 'moves on' after Melbourne anger

Pistorius 'to be sentenced in June'