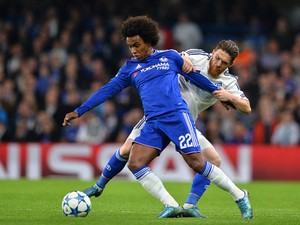 Chelsea moved into the top two of Champions League Group G courtesy of a 2-1 victory over Dynamo Kiev at Stamford Bridge this evening.

Aleksandar Dragovic scored at both ends in West London, first giving Chelsea the lead by nodding past his own keeper in the first half before restoring parity 12 minutes from time.

The visitors were level for just five minutes, however, as Willian scored his fifth free kick of the season to wrap up the points for his side and ease some of the pressure on manager Jose Mourinho.

Find out how all of the action unfolded courtesy of Sports Mole's live minute-by-minute coverage below.

Sort:
Newest
Oldest
6.45pmGood evening! Thank you very much for joining Sports Mole for tonight's Champions League clash between Chelsea and Dynamo Kiev at Stamford Bridge. Every game involving the hosts seems like a huge one at the moment, and tonight is no different as they look to take a big step towards booking their place in the knockout stages of this competition. Kiev have the same goal, however, and come into this game one point and one place better off than the Blues in Group G. Let's start with a look at the two teams on show...
6.47pmCHELSEA STARTING XI: Begovic; Azpilicueta, Zouma, Terry, Baba Rahman; Ramires, Matic; Willian, Fabregas, Oscar; Diego Costa
6.47pmCHELSEA SUBS: Blackman, Cahill, Loftus-Cheek, Kenedy, Hazard, Pedro, Remy
6.49pmThe headline news from the Chelsea camp, then, is that Eden Hazard has been dropped to the bench by Jose Mourinho, and not for the first time this season. The Belgian has simply looked like a shadow of his old self so far this campaign, getting nowhere near the high standards he set on his way to being named PFA Player of the Year last term. Of course, he is by no means the only Chelsea player guilty of failing to reach those levels, but considering how big an impact he had last season, it has been remarkable to see him struggle to much this time around. 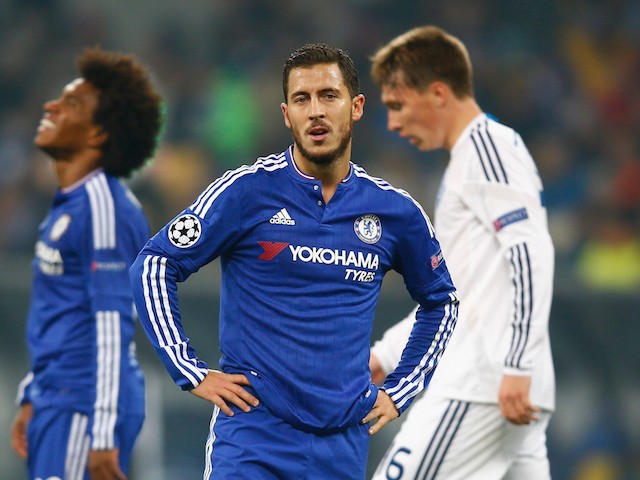 Enter your email address to subscribe to Sports Mole's free daily transfer newsletter! Sent twice a day during the transfer window.
View our homepages for Jose Mourinho, Sergei Rebrov, Aleksandar Dragovic, Willian, Football
Follow @SMChelsea to get every Chelsea headline from Sports Mole, and follow @SportsMole for the latest breaking news stories
Recommended Next on SM

Chelsea's Eden Hazard ruled out of match against Aston Villa

Guus Hiddink: 'Thibaut Courtois is under contract at Chelsea and enjoys London'

Result: Manchester City seal their first ever quarter-final spot in the Champions League

Martinez not 'unsettled' by Lukaku's claims
4

Can England really go all the way in France?
8

Wenger: 'Staying Arsenal boss is not a surprise'
1

Ferguson: 'Pep will find it difficult'
10

Can England really go all the way in France?
4

Wenger: 'Staying Arsenal boss is not a surprise'
9

Martinez not 'unsettled' by Lukaku's claims
10

Can England really go all the way in France?

Verstappen 'moves on' after Melbourne anger

Pistorius 'to be sentenced in June'