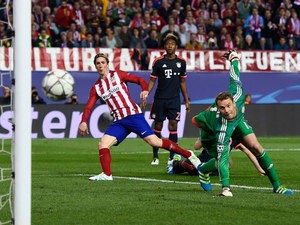 © Getty Images
Atletico Madrid striker Fernando Torres wants to create history with the club by winning the Champions League for the first time ever.
By Barney Corkhill, Staff Reporter
Filed: Tuesday, May 3, 2016 at 22:24 UK

Atletico Madrid striker Fernando Torres has set his sights on creating history with the club following their progress into the final of the Champions League.

The Rojiblancos booked their place in the Milan final on May 28 despite a 2-1 defeat to Bayern Munich at the Allianz Arena this evening, going through on away goals to set up a showdown with either Manchester City or Real Madrid.

Atletico could have a chance to gain revenge over local rivals Real for their defeat in the 2014 final, but Torres insists that he does not care which team progresses from the second semi-final as Atleti go in search of their maiden Champions League triumph.

"It was very intense. We are so proud of this team, it is fully deserved. We've beaten some of the best teams in Europe, now we're one step closer to the dream we all have," Torres, who missed a penalty in Munich, told BT Sport.

"Sometimes when you play against a super team like Bayern you can't play the way you want, they play so quick, they had control in the first half and we suffered a lot, but in the second half we wanted to do the opposite, to have counter-attacks and press high. In the end we got the goal.

"We want to win. We have a chance to write the history that nobody at Atletico has. It doesn't matter who the opponent in the final is. We are ready to fight with everyone."

Atletico are in the final for just the third time ever, having previously finished as runners-up in 1974 and 2014.

Read Next:
Griezmann: 'Bayern were the better side'
>

Enter your email address to subscribe to Sports Mole's free daily transfer newsletter! Sent twice a day during the transfer window.
View our homepages for Fernando Torres, Football
Follow @SMAtletico to get every Atletico headline from Sports Mole, and follow @SportsMole for the latest breaking news stories
Recommended Next on SM

Griezmann: 'Bayern were the better side'

West Ham plead with fans not to invade pitch

Report: Sakho to be cleared of charges
9

Buffon backs Italy to "surprise everyone"
8

Montolivo, Motta out of Scotland game
9

Bruce: 'I need assurances over future'
10

Result: Djokovic marches on in Paris

England in control of second Test

England in comfortable position in Durham

Spieth moves back into contention in Texas

Result: Haye knocks out Gjergjaj to set up Briggs clash