Ray Parlour: 'Jamie Vardy move to Arsenal has fallen through' 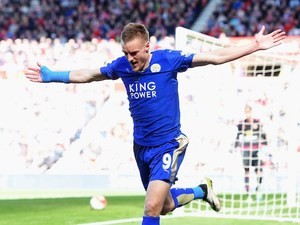 Former Arsenal midfielder Ray Parlour has revealed that Jamie Vardy's proposed move to the club looks to have fallen through.

The Gunners activated a £20m release clause in the Leicester City striker's contract last week and had reportedly offered him a three-year deal worth £120,000 a week.

However, reports emerged yesterday suggesting that the 29-year-old, who scored 24 Premier League goals to help fire the Foxes to the title last season, was leaning towards rejecting the offer.

"It looks like it isn't happening now. I was at the Arsenal the other day and there were big reports flying around, and the club's cameramen and digital staff had to get down to the training ground," Parlour told talkSPORT.

"So it looked like it was going to happen - there was a medical being done. But it seems Vardy thought about it while on England duty, and suddenly there was a U-turn."

Vardy is currently with the England squad preparing for their Euro 2016 opener on Saturday.

Should Jamie Vardy stay with Leicester or leave for Arsenal this summer?

Enter your email address to subscribe to Sports Mole's free daily transfer newsletter! Sent twice a day during the transfer window.
View our homepages for Ray Parlour, Jamie Vardy, Football
Follow @SMArsenal to get every Arsenal headline from Sports Mole, and follow @SportsMole for the latest breaking news stories
Recommended Next on SM

Hughton: 'We must regroup'
Your Comments
More Arsenal News

Ricciardo happy with Verstappen until 2018
> View all headlines
Tables

Ricciardo happy with Verstappen until 2018