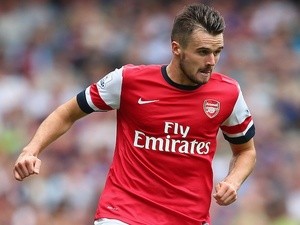 © Getty Images
Crystal Palace manager Sam Allardyce admits that the deal to sign Carl Jenkinson from Arsenal is "hanging in the balance" due to discussions over personal terms.
By Barney Corkhill, Staff Reporter
Filed: Monday, January 16, 2017 at 16:11 UK

Crystal Palace manager Sam Allardyce has confirmed that the club have come to an agreement with Arsenal over a possible deal to sign Carl Jenkinson.

The 24-year-old has been linked with a £3m move to Selhurst Park this month, with Arsenal boss Arsene Wenger revealing that the deal should be completed early this week.

However, Allardyce insists that terms have not yet been agreed with the full-back and hinted that he has expanded his transfer network in an attempt to attract more players to the club following the £12m arrival of Jeffrey Schlupp.

"I think [Jenkinson's move is down to] negotiations between the chairman and the player's agent. While we appear to have an agreement with Arsenal, that agreement with the player hasn't reached a conclusion, so that's hanging in the balance, as we say," he told reporters.

"We're still searching for players. We've exhausted this country, we're more looking at the European element now, because of the vast cost of the players in this country. They're a really big price. Someone said to me 'You spent a lot of money on Schlupp'. It's not really; it's very little compared to what everybody else is spending and valuing their players at. He's actually quite cheap compared to what we've been quoted for other players. It's expensive on where we've been before but not expensive in the market.

"He brings a lot of energy, experience for such a young man. He experienced a Premier League-winning run last year. Can play in three positions - wide left, wing-back or left-back - that could be important in a small squad. He was desperate to come, desperate to leave Leicester even though they're champions."

Palace have also been linked with a move for Juventus full-back Patrice Evra this month.

Nadal fights back to defeat Zverev in Melbourne
4

Conte: 'Ake is ready to play for Chelsea'
2

Nadal fights back to defeat Zverev in Melbourne
4