Sri Lanka fight back against England in third Test

Sri Lanka fight back strongly against England as they end day two of the third Test 162-1, which leaves them trailing by 254 runs at Lord's.
By Danielle Joynson, Staff Reporter
Filed: Friday, June 10, 2016 at 18:32 UK

Sri Lanka have responded to England's first-innings total of 416 runs by ending day two of the third Test on 162-1 at Lord's.

Dimuth Karunaratne's half-century and an unbeaten 79 from Kaushal Silva have put the tourists back in contention following an impressive display with the bat from England. 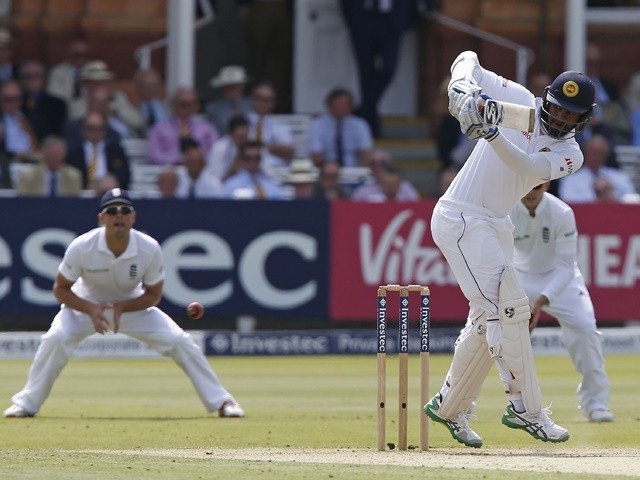 It has been a Test to remember for Jonny Bairstow so far as he ended the innings 167 not out, while Chris Woakes nabbed a half-century, eventually falling to Rangana Herath for 66.

England began the day on 279-6, but they were eventually bowled out before tea as Stuart Broad (14), Steven Finn (7) and James Anderson (4) added to the run total.

In reply, Karunaratne and Silva had a strong partnership as they racked up 108 runs before the former fell after hitting 50 off 101 deliveries.

Steven Finn took the wicket, but Broad and Woakes failed in 10 overs each, while Moeen Ali could not find a breakthrough in eight and Anderson's dry spell in Sri Lanka's innings stretched to 11 overs.

Silva and Kusal Mendis (25*) will continue Sri Lanka's attack at the crease tomorrow.

Read Next:
Woakes to replace Stokes in England team
>

Rooney: 'Hodgson right to rest me'
8

Result: Konta fights back to beat Kvitova in Eastbourne

Footballer 'sent off for breaking wind'

Johnson moves ahead of McIlroy in world rankings

Golf's top stars hit out at US Open controversy

Groves: 'I feel rejuvenated ahead of Murray clash'