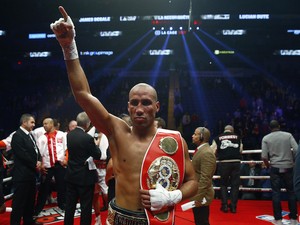 James DeGale has weighed in at 166.5lbs ahead of his world super-middleweight unification clash with Badou Jack on Saturday night.

The former Olympic gold medallist will put his IBF belt on the line against WBC title holder Jack and he came in light when hitting the scales in New York.

Jack also came in well below the 168lb limit at 167.2lbs as he looks to make the third successful defence of his world crown.

The winner of the bout will face Great Britain's Callum Smith - the WBC's mandatory challenger - in their next bout in the summer.

DeGale has won 23 of his 24 contests in the professional ranks, while Jack has suffered just one defeat in 23 outings.

Read Next:
Smith happy to wait on Jack, DeGale winner
>

View our homepages for James DeGale, Badou Jack, Callum Smith, Boxing
Follow @SportsMole for the latest breaking news stories, and follow @sm_headlines to get every headline from Sports Mole
Recommended Next on SM

DeGale: 'Groves is desperate for rematch'
Your Comments

Debuchy told he can leave Arsenal
7

Baxter to return to Everton after drugs ban
8

Allardyce: 'Van Aanholt was my saviour'
10

Debuchy told he can leave Arsenal
7

Baxter to return to Everton after drugs ban
8

Allardyce: 'Van Aanholt was my saviour'
9

Federer: "I couldn't be happier"

Bottas: 'I can deal with Mercedes pressure'

Bilic released from hospital after illness

Tyson Fury: 'No comeback in next 10 years'